Take your event to the next level…

Once the business of your conference or event is wrapped up, are you ready for your guests to settle back for some AMAZING and HILARIOUS entertainment?

That’s where Pete Booth’s Comedy and Magic Stage show comes in! Imagine your guests joining in the fun of this interactive, amazing and magical live experience.

Pete never makes fun of anyone, but does get many people involved with the fun! What was a formal conference is now a magic and comedy show like you would see on TV, but at YOUR event to see up-close and be part of!


Combination packages are also available with INTERACTIVE CLOSE-UP MAGIC before the show. 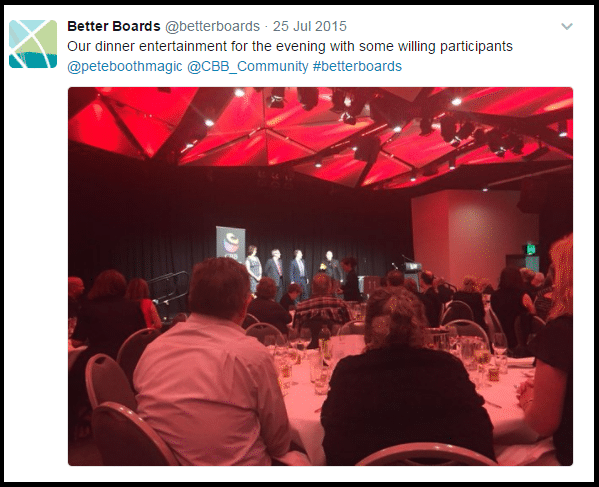 LIGHT UP YOUR SOCIAL MEDIA
Do you have a social media page or hashtag for your event? Pete gurantees to get people talking as their friends and colleagues take part in the show! With so many conferences you need to give your guests a truly exciting and emotional experience that will make them want to share it with their friends. The show is filled with funny and memorable moments so your social media pages will light up with pictures and praise for your event!

Maximise the ROI For Your Sponsors!

The key to ensuring a long relationship with your conference sponsors is to maximise the reach of their message and their ROI.

What if instead of just a banner or short speech at the start of the night promoting your sponsor, their message could be be part of the main event?

Pete can work with your sponsors to incorporate their message right into the show! A cusomised piece of magic to ensure the sponsor’s message is being promoted at exactly the time everyone is paying the most attention will create the longest impression in your guest’s minds!

A great ROI ensures your sponsors return to your event year after year.

Have Pete Booth Bring Some Magic To Your Event as Emcee

Pete can also Emcee your next function, adding a little magic and humour to the evening while keeping the night rolling along at a nice pace and ensuring the best possible atmosphere for your speakers.

Imagine a magical appearance for your CEO or main speaker. Pete is able to tailor a unique, breathtaking and fun introduction to the stage for your VIPs.

CHECK AVAILABILITY FOR YOUR EVENT